Donkeys in Santorini Abused and Used as Taxis: Please Help Them!

Horrific conditions that approximately 100 donkeys and mules are forced to endure every day on the Greek island of Santorini. They carry heavy loads, are given practically no respite from the hot Mediterranean sun, and are even denied access to water. They also incur wounds and abrasions from ill-fitting and worn-out saddles.

The donkeys and mules are being used as “taxis” to transport tourists up more than 500 steps to the old town of Firá, even though a cable car has been operating for decades nearby. The animals’ owners and local authorities still hold onto the “tradition” of riding donkeys, even though their treatment constitutes a clear breach of Greek animal-welfare laws.

Under these laws, animals must have access to water and protection from the weather, but many of those used for rides are tied to a wall or rail for hours in the blistering summer sun with no access to water whatsoever. Some try desperately to find shade. These conditions are illegal but apparently tolerated by the authorities.

The animals are often forced to make the strenuous climb up and down the steps four or five times a day. According to veterinary recommendations, donkeys shouldn’t carry more than 20 percent of their bodyweight, approximately 110 pounds. But profit-driven owners often allow heavier riders, placing a great strain on the animals’ backs and joints. This has grave consequences for the donkeys. If they become too weak to carry on with their “work,” they’re often abandoned and left to die.

Many tourists who ride the donkeys seem not to know what they’re doing, and some handle them inhumanely. People have been observed digging their heels into their sides. When the donkeys stop on the steps, the owners often use sticks or whips to drive them on. In one instance, a driver first yanked the animal by the reins then violently beat him with a stick. 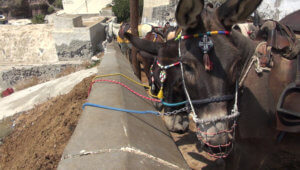 Animals are tied for hours to a wall or rail without access to water. 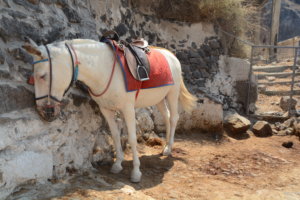 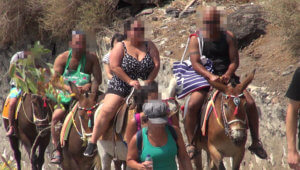 Donkeys are forced to carry loads greater than the recommended maximum weight, straining their backs and joints. 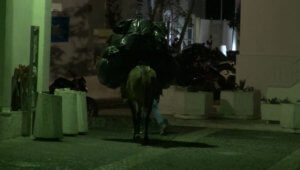 The animals are forced to haul huge bags of garbage.

Many animals incur deep wounds and abrasions from ill-fitting saddles, particularly around the girth. Because they’re continually irritated by the equipment, the deep wounds can’t heal properly, which can lead to long-term pain. Additionally, eyewitnesses observed untreated wounds teeming with flies on some animals’ heads. Rather than being treated for their injuries, the animals are simply forced to continue working by owners who clearly prioritize profit over well-being. 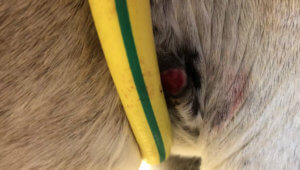 Donkeys and mules often sustain wounds on their abdomens from ill-fitting and worn-out equipment. 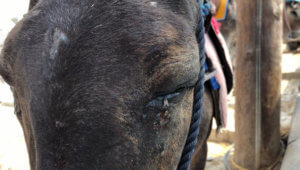 Animals’ wounds were teeming with flies.

Even at night, some donkeys on Santorini get no rest: they’re forced to haul heavy bags of garbage.

No tradition can justify enslaving people—human or otherwise. This exploitation needs to end now.

Renowned horse expert and nonfiction author Ingolf Bender assessed the animal-welfare issues related to exploiting animals for rides in conditions such as those on Santorini. He condemns the use of equipment that causes avoidable injuries and considers it “a severe breach of animal welfare” to use animals for hours on end without providing them with food or water. If there is no change in the care of these animals and the equipment used, the donkeys must be taken out of service immediately.

My trip to Santorini: